A few months ago, Jackie and I had the incredible opportunity to stay with a Japanese family in the town of Wakuza, Japan for a night.

We arrived to meet a woman and her son who was about four years old, he was shy and hid behind his mom every chance he could. We soon found out that our “mom” for the evening had travelled to America and knew some English! This was a big help for us, though the rest of the family (four generations worth in one house) spoke only Japanese.

We spent the evening watching two kids, as there was a little two year old at home playing with his toys. It didn’t take long before the boys realized that Jackie and I were pretty fun to hang out with and we were now the new toys for them to play with. We spent the night running around (getting in our steps LOL), picking them up, playing chef, driving toy cars 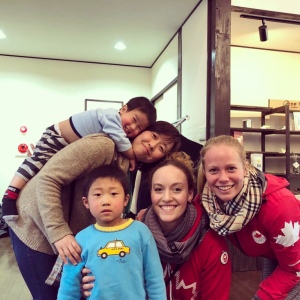 and trying to calm them down at the end of the night, unsuccessfully.

We had a traditional meal, with pickled vegetables, rice and tempura. We also tried all sorts of odd foods that made the meal even more interesting!

We then were asked if we wanted to go to the public bath. My first thought was, “Oh no, I don’t have a swim suit to wear.” Jackie looks at me with a quick grin and shares that you don’t wear bathing suits to these places. An interesting experience to say the least!! Hahaha

We ended our night in our little meditation room on the straw floor with one pillow, hats, mittens and a ton of blankets as we were basically sleeping outside! All that separated us from the cold February air, was some paper thin sliding doors….

The next day, some little boy tears and a lot of hugs later, we said our good-bye’s…

This experience was one I will never forget! The time spent walking in the fields, playing with the kids and just being fully immersed in the Japanese culture; it puts everything into perspective and really makes you think about how lucky we are to have the things that we sometimes take for granted.

Hello Everyone!! I am a synchronized swimmer on the Canadian National Team. Follow my blog to get an inside look at what it is like to be an elite athlete! Enjoy!! View more posts